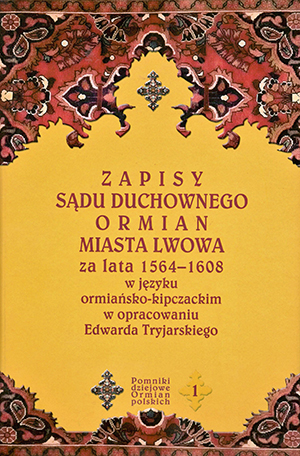 Prof. Edward Tryjarski, who is an outstanding orientalist and Turkologist, has been studying the documents of the Polish Armenians for many years. In the sixteenth century and seventeenth century the Polish Armenians used Kipchak, which is a Turkic language, in their speech and writing. They had lost their mother tongue (Armenian from the Indo-European family) before they came to Poland, but they used Armenian writing, which, as Christians, they knew from their church practice, for the records concerning the Kipchak language, which they themselves called Tartaric, and which they probably adopted in Crimea. Edward Tryjarski published Records of the Armenian clerical court of the city of Lwów for 1625-1630 in Armeno-Kipchak in Kraków in 2010. He dedicated the following years to older documents from the same court from 1564-1608. They are kept in the Mekhitarist (an Armenian Catholic Order) Monastery Library in Vienna under manuscript number 446. The manuscript contains 178 pages (recto and verso).

As in the case of the 2010 publication, Prof. Tryjarski has once again displayed his outstanding talent for scholarship and editing. He has read and transcribed the entire Vienna manuscript in Latin alphabet and translated its contents into Polish from Kipczak. The manuscript is preceded by an extensive and informative introduction, and an index is appended (mini-dictionaries and lists). The volume is offered with a CD containing the original edited Viennese manuscript attached. This monumental work has been published on paper because it will deepen knowledge of the Armeno-Kipchak language, which was already extinct at the end of the seventeenth century (and is now being studied in places including Kazakhstan!), but its primary value lies in the extensive historical material contained in the texts from the Armenian clerical court. The court records from old Lwów translated by Professor Edward Tryjarski also constitute a rich source for research into the past of the Lwów Armenians, who were often wealthy and influential. By gaining an impression of their lives we are able to learn much about those of other residents in a period when the city played an important role (as it did, of course, in other centuries) in the economics and politics of the Kingdom of Poland.

The work under review here represents first-class scholarship. As a philologist, Professor Tryjarski has extended his repertoire of research skills to include material on the history of law, which is important for understanding many fine details. This new legal material significantly enriches the erudite introduction to the work under review. Professor Tryjarski’s efforts to establish Polish equivalents for the names of liturgical objects associated with Armenian churches, which in the period in which the documents of manuscript No. 446 originated were subordinate to the catholicoi of Ejmiatsin (Armenian Apostolic Church) and not to the Roman pope (the union of Polish Armenians with the Catholic Church did not take place until the seventeenth century), deserve recognition.

Monuments of the history of the Polish Armenians