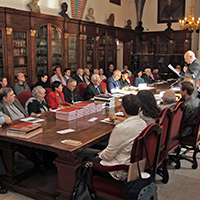 Approximately eighty guests were invited, including the President of PAU, Professor Jan Ostrowski, members of the Centre’s Council and Edward Mier-Jędrzejowicz, a representative of the Armenian minority on the Joint Commission of the Government of the Republic of Poland and the National and Ethnic Minorities, Professor Franciszek Ziejka, former rector of the Jagiellonian University, Professor Jan Święch, dean of the Faculty of History at the Jagiellonian University, Kaspar Karampetian, president of the European Armenian Federation for Justice and Democracy in Brussels, Professor Valentina Calzolari Bouvier of Centre de recherches arménologiques at the University of Geneva, president of Association Internationale des Etudes Arméniennes, Dr Harutyun Marutyan, director of the Armenian Genocide Museum-Institute (Հայոց ցեղասպանության թանգարան-ինստիտուտ) in Yerevan, Dr Bálint Kovács of the Faculty of Armenology (Örmény Tanulmányok Tanszék) of the Péter Pázmány Catholic University (Pázmány Péter Katolikus Egyetem), vardapet Vahan Ohanian of the Mekhitarist monastery in Venice, prelate Henryk Błaszczyk from the Ordinariate of the Armenian Catholic Church in Ukraine (Odessa-Kiev), Józef Wołczański, professor of the John Paul II Pontifical University in Kraków, Fr. Marek Miławicki OP from Wrocław, who studies the religious history of the Polish Armenians, Maria Ohanowicz-Tarasiuk, president of the Foundation for the Culture and Heritage of Polish Armenians in Warsaw, Tomasz Knothe, former Polish ambassador to Yerevan, Maksym Potapenko of the Nizhyn Mykola Gogol State University (Ніжинський державний університет ім. М. В. Гоголя), Hrair Hawk Khatcherian, a well-known Armenian photographer from Canada, Andrzej Urbański, director of the Museum in Zamość, and Anna Piontek from the Museum in Gliwice.

Congratulatory letters and greetings were sent by Wojciech Kolarski, Minister in the Chancellery of the President of the Republic of Poland, Paweł Cieplak, the current Polish ambassador to Yerevan, Edgar Ghazaryan, former Armenian Ambassador to Warsaw, who is now director of the Armenian Constitutional Court in Yerevan, Krzysztof Nitkiewicz, Bishop of Sandomierz, Razmik Panosyan of the Caluste Gulbenkian Foundation (Fundação Calouste Gulbenkian) in Lisbon, and Nicolas Tavitian, director of the Armenian General Benevolent Union (Europe) in Brussels.

Professor Jan Ostrowski was the first to speak:
Armenians have been associated with the history of Poland at least since the fourteenth century. Their important achievements include the development of the Eastern trade, the creation of a centre of artistic craftsmanship in Lwów that benefited the whole country and, of course, their contributions to the improvement of agriculture in the nineteenth and twentieth centuries. Several churches have been built by the Armenian community in the former Polish eastern lands, which have been – I feel honour bound to mention – the subject of superb studies by Dr Joanna Wolanska and one of my students, dr. hab. Jacek Chrząszczewski. The Polish Armenians have blended into Polish society in a model way: they occupy a high position within it, and they have demonstrated their patriotism in the difficult political circumstances of the twentieth century. In the main, they have adopted the Polish language, but they remain recognizable by their names and have retained a strong awareness of their origin. It is the duty of the Polish scholarly community to study the Armenian tradition. I am therefore glad to see that this endeavour is taking institutional form and receiving the support of the eminent people from all over the world who have accepted the responsibility of serving on the Centre’s Council.

Andrzej A. Zięba spoke of the Centre’s history and programme:
The Research Centre for Armenian Culture in Poland was raised on the sound foundations laid, both in the past and in more recent times, by the historians, linguists and other specialists of Kraków who have studied culture of Armenia and Polish Armenians. In recent times, their activities have been supported both by a section of the academic community (in this respect Jerzy Wyrozumski, a historian from the Jagiellonian University and general secretary of the Polish Academy of Arts and Sciences, deserves particular mention) and by the Polish Armenian community. These twin strands of support have provided invaluable motivation for the efforts to create an institution dedicated to Armenology precisely here in Krakow, because they have demonstrated the academic and social need for research of this kind. It is against this background that a number of important initiatives for Polish armenology have been taken in the last few years. First there is the “Lehahayer” journal, which is dedicated to the history of the Polish Armenians (this year sees publication of its sixth annual edition). It is supported financially primarily by the Lanckoroński Foundation, as well as by the Jagiellonian University and the Gumiński Foundation. Then there is the source series “Pomniki dziejowe Ormian polskich” (Monuments of the History of the Polish Armenians) that is being produced by the Foundation for the Culture and Heritage of Polish Armenians thanks to a grant from the National Humanities Development Programme. In terms of organization, however, these have been semi-private or – one might almost say – partisan activities. Now the Centre is established, they can take institutional form.
Efforts to establish the Centre began in 2014 and have proceeded ever since. They have been supported by the written or oral recommendations of the following: Professor Franciszek Ziejka (Jagiellonian University), Professor Krzysztof Penderecki (PAU), Professor Claude Mutafian (Université Paris XIII), Professor Andrzej Pisowicz (Jagiellonian University), Professor Andrzej Nowak (Jagiellonian University), Professor S. Peter Cowe (University of California Los Angeles), and Edward Mier-Jędrzejowicz (representative of the Armenian minority on the Joint Commission of the Government of the Republic of Poland and the National Minorities). At PAU, the idea met with a friendly reception from Professor Wyrozumski, who was mentioned above, as well as from Professor Ostrowski, who is PAU’s current president. Armen Artwich (then director of the Legal Department in the Chancellery of the Prime Minister) and Anna Michalewicz, director of the office at PAU and responsible for project portfolios there, also assisted with the efforts to establish the Centre. Of course, the decision taken in April 2019 to allocate funds for the establishment of the Centre by Jarosław Gowin, the Minister of Science and Higher Education, and Deputy Prime Minister, was of central importance. It demonstrates the concern of the current Polish government for the heritage of the national minorities in the historical Polish-Lithuanian Commonwealth (including the lands of the former Grand Duchy of Lithuania). The resolution passed on 10 September 2019 by the PAU Council to establish the Centre and its adoption of the Centre’s statute represented further stages in the Centre’s establishment.
The cooperation of armenological circles near and far – especially in Warsaw, Budapest, Cluj-Napoca, Minsk, Lviv, Kiev and Yerevan – has been required to launch the Centre, and will continue to be needed to develop it. The need for comparative research on the related Armenian diaspora communities in Poland, Transylvania, Belarus, Pokuttia, Bukovina and the further Ukraine is after all indisputable. The focus of the Centre’s work lies in archival and analytical research, and dissemination of the results. Fortunately, we are not starting from scratch in these areas: the editorial work we have already mentioned will continue. The Centre also intends to take part in developing research methods and tools for Polish Armenology, including bibliographies and biographical dictionaries, and digitization of archival sources threatened with destruction. Naturally, all of the Centre’s research fellows will continue their individual study of the history of the Armenians.

Professor Ostrowski then presented the diplomas nominating the members of the Centre’s Council, on which a number of representatives of the Polish Armenians, distinguished scholars, and institutions promoting Armenian research had agreed to serve. In alphabetical order they are: Monika Agopsowicz from the Foundation for the Culture and Heritage of Polish Armenians, Professor George Bournoutian from the United States, Professor Armenuhi Drost-Abgarjan of Martin-Luther-Universität Halle-Wittenberg, Professor Armen Edigarian of the Jagiellonian University, Armen Khechoyan from the Aniv Foundation for the Support of Armenian Studies (Фонд развития и подддержки арменоведческих исследований “Анив”), Zbigniew Manugiewicz, Professor Lidia Matynian from the Academy of Music in Kraków, Edward Mier-Jędrzejowicz, Professor Claude Mutafian from the National Academy of Sciences of the Republic of Armenia (Հայաստանի Հանրապետության գիտությունների ազգային ակադեմիա), Professor Józef Naumowicz from the Cardinal Stefan Wyszyński University of Warsaw, Professor Judit Pál from Babeș-Bolyai University in Cluj-Napoca, Professor Andrzej Pisowicz, the doyen of Kraków Armenian studies, Professor Ara Sayegh from the Wroclaw University of Science and Technology, and Professors Ewa Siemieniec-Gołas and Krzysztof Stopka of the Jagiellonian University.

The following persons spoke in the discussion: Edward Mier-Jędrzejowicz, Professor Calzonari, Professor Bournoutian, Professor Drost Abgarjan, Professor Naumowicz, Armen Khechoyan, and Rev. Błaszczyk. In addition, Harutyun Marutyan gave a talk about the museum he represents. After the break the inauguration lecture was given by a special guest: vardapet Vahan Ohanian from Venice. He presented a profile of the eminent nineteenth-century armenologist Ghewond Alishan, who was a Mekhitarist, a romantic poet and a national visionary. A fuller version of the lecture was published in the sixth edition of the annual journal “Lehahayer”.

The inauguration was accompanied by a display of Armenian artefacts kept in the Jagiellonian University Museum. These were portraits in oil of Armenian Benedictine abbesses from Lwów (depository of the Foundation for the Culture and Heritage of the Polish Armenians) and a liturgical veil from the monastery in Muş (see the article in volume five of “Lehahayer”). The cultural background of the liturgical veil was explained by Joanna Sławińska and Jakub Osiecki. The guests from abroad also had the opportunity to view the collection of Armenian manuscripts in the Princes Czartoryski Library, about which Professor Stopka talked.