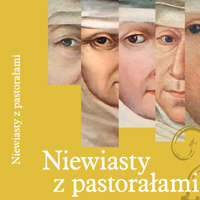 Of the source materials in the book, the extensive inventory of the convent of the Armenian Benedictine sisters in Lviv from 1845, which has been prepared for publishing by Tomasz Krzyżowski and Marek Stasiowski, is of particular value. The volume includes rich iconographic documentation. Monika Zołoteńka provides the graphic art and design. It is published by Księgarnia Akademicka [Academic Bookshop] of Kraków. The collection appears courtesy of funds provided by the Ministry of Administration and Internal Affairs, by the Mazowieckie Voivodship, and by the Museum of the Jagiellonian University.

Orders can be placed at the address below:

The history of how the likenesses of the Armenian Benedictines came to be made dates back to the eighteenth century. The history of the Armenian convent in Lviv, where they were discovered, is a special case for two reasons. First, the exceptionality of forms of female Armenian monasticism and, second, the traditional role of women in Armenian mores. Among Polish Armenians – in Kamieniec Podolski, in Jazłowiec, in Lviv – the idea of a community organised by women could not easily have been reconciled with the principle of male domination of family life, which applied to immigrant Armenians to an incomparably higher degree than it had in the Armenian society of Old Poland. The first Armenian nuns in Poland were therefore entirely subject to the authority of the gmina elders, who even claimed the right to approve new candidates for the female order.

As the social integration of the immigrants proceeded, and especially following the union of the Armenian Polish Church with the Catholic Church (seventeenth century), a change in mentality began. The new turn of mind led to the establishment in Lviv of a new kind of community of Armenian nuns, who lived in their own convent and observed the rule of St Benedict, who were independent of the Armenian gmina elders, who enjoyed autonomy under the general authority of a bishop, and who were led by a female superior.

In 1701, the community of Armenian nuns selected Marianna Nersesowiczówna, an Armenian, who had earlier been a Benedictine of the Roman Catholic rite in the convent in Jarosław, as abbess. She was the first nun (succeeded by a further ten) to bear the crosier – attribute of bishops, abbots, archimandrites, and protonotaries apostolic – as the symbol of her authority. A woman had received this symbol of pastoral office for the first time in the history of Armenians. Beginning with Nersesowiczówna. portraits were made of the abbesses with crosiers, and their splendid likenesses, painted in oil on canvas, were hung in the choir of the cathedral. Only sisters who sang there during the liturgy and played instruments could enter.

Benefitting from great good fortune, the portraits survived the second world war, but matters were then complicated by a shift in the eastern border of Poland. It was then that the convent of Armenian Benedictines of Lviv departed its original headquarters at the Armenian Cathedral there and settled first at the Benedictine Abbey of Lubiń in Greater Poland – where, in 1954, the last abbess, Elekta Orłowska, passed away – and in 1958 at Wołów in Lower Silesia. It was at Wołów, in 1961, that the convent relinquished the Armenian right and became united as one with a Catholic Benedictine order.

The portraits, and all of the possessions of the Benedictine sisters, were brought to Poland. In 2017, the abbess of Wołów, Sr Maria Danuta Trybała, stated her wish to donate the portraits to the Foundation for the Culture and Heritage of Polish Armenians. The foundation was established by Cardinal Józef Glemp to collect and preserve the historical heritage of the Armenian Catholic Church in Poland and now enjoys the patronage of Cardinal Kazimierz Nycz. The gift of the Wołów sisters is of great value and significance to Polish Armenians. Following their restoration and documentation at the Museum of the Jagiellonian University, the full artistic merit of the portraits can now be appreciated. There is no doubt that they represent an important element of the spiritual heritage both of Armenians and of Old Poland.