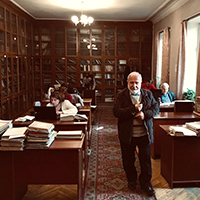 In the second half of December 2019 discussions on long-term cooperation were held in Yerevan between the National Archives of Armenia (Հայաստանի ազգային արխիվ) and Dr Jakub Osiecki, who was representing the Research Centre for Armenian Culture in Poland (RCACP). The discussions had been preceded by an exchange of correspondence facilitated by Krystyna Yeremyan, who is active in the Polish diaspora in Armenia, to whom we express our thanks. Director of the National Archives of Armenia, Professor Amatun Wirabjan (Ամատունի Վիրաբյան), and vice-director Sonja Mirzojan (Սոնյա Միրզոյան) agreed on behalf of the National Archives of Armenia to assist RCACP in an investigation of Polish-Armenian relations that will involve all of the collections held by that institution. Further research visits will soon be undertaken for this purpose.

So far, the Armenian National Archives has prepared the documents from 1955-1992 (Հայ-լեհական հարաբերություններ 1955-1992թթ.). A paper by Dr Jakub Osiecki on contacts between the Polish-Armenian Association of Lwów and the Armenian National Delegation in Paris and Berlin in 1919-1923 will be one of the first results of this preparation of a collection of old documents on Polish-Armenian relations. It will be published in the seventh annual edition of the journal “Lehahayer”.