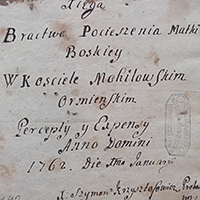 There are few surviving artefacts of the Polish Armenians and even fewer in the collections of Polish libraries and archives, which makes the Library of the Research Centre for Armenian Culture in Poland particularly delighted to have acquired a valuable artefact of the history of Polish Armenians. The item in question is the manuscript book Percepta et expensa (1762-1804), which belonged to one of the pious confraternities operating at the Armenian Catholic Cathedral in Mohylów Podolski.

The manuscript comes from the Krzyżanowski family collection. Stanisław Krzyżanowski (1841-1881), who was a historian and collector, a doctor of the Jagiellonian University, an extraordinary member of the Academy of Arts and Sciences in Kraków, and a member of several foreign scientific societies, kept it in the library at his pile in Cherpovody (Powiat humański, Umansky Uyezd, Humań district). He was the author of studies, source editions and contributions to Polish history. He donated some of his manuscript collections to the Kraków Scientific Society and they are now in the libraries of the Polish Academy of Sciences and the Polish Academy of Arts and Sciences. Besides archaeology, numismatics, heraldry and genealogy, he was also interested in the past of the former Polish Eastern Borderlands. In manuscript, he left a six-volume work about the Bracław (Bratslav) region. He devoted two publications to the Polish Armenians: Silva rerum księdza Szymona Krzysztofowicza, kanonika katedry kamienieckiej oficjała podolskiego i proboszcza mohylowskiego (1763-1808) [Silva rerum of Father Szymon Krzysztofowicz, canon of the Kamieniec Cathedral, official of Podolia and parish priest of Muszyna (1763-1808)] (Humań 1863, Odessa 1864) and Kościół N[ajświętszej] Maryi Panny w Mohylowie nad Dniestrem [Church of the Blessed Virgin Mary in Mohylów nad Dniester] (Kraków 1867). 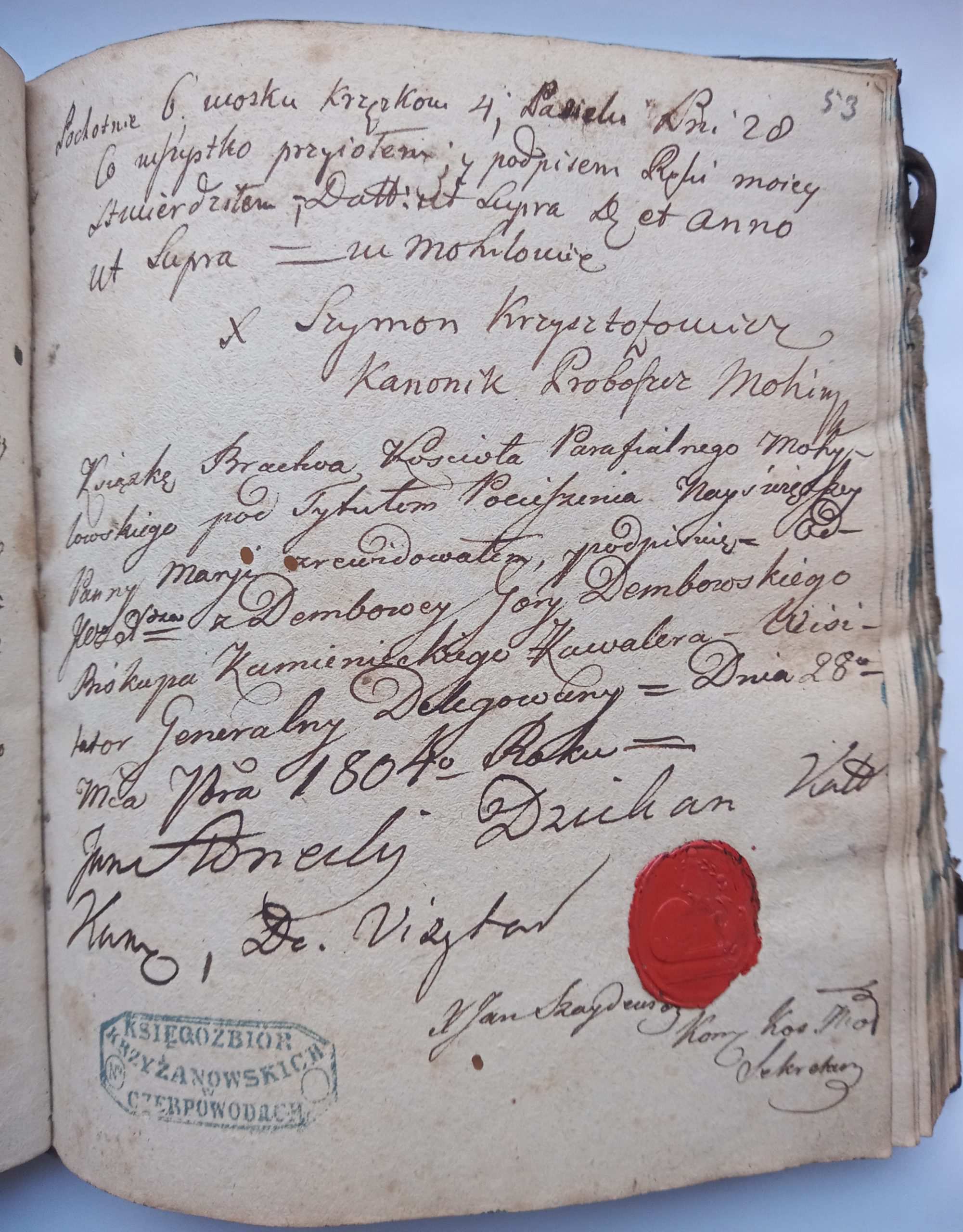 From this second publication (pp. 26-27) comes the short history of the brotherhood whose book we have acquired. Based on notes made by Szymon Krzysztofowicz, an Armenian priest, Krzyżanowski states that the brotherhood was founded by the Augustinians with the consent of the general of their order. Initially, it operated at the brick church of St. Nicholas and moved to the Armenian church on 1 July 1761. It gathered the faithful of the Latin rite. In exchange for the possibility of working at the Armenian church, it paid the pastor a modest subsidy of sixteen zloty per year for four quarterly masses, as well as four zloty for an organist. Each year, in the presence of the pastor, the elder brother was elected, who at the end of his term of office, ‘at the expiration of the year’, gave the pastor a ‘calculation’ of the brothers’ income and expenses. Fr. Krzysztofowicz did not approve of the way the brotherhood was run and he noted down for his successor:

Thus, it is necessary ante omnia that the parish priest strictly orders these brothers not to govern themselves and not to lend money to anyone from the fraternity without the knowledge of the parish priest or the vicar, because in my memory the fraternity had – because of my efforts – a few hundred zlotys, but they were secretly lending money to one another and the money was lost, so we must always have them in animadversion, and that way the fraternity can approach some sort of integrity.

This is probably why Fr. Krzysztofowicz established the book for recording the income and expenses of the brothers. It is the only known remnant of the fraternities operating at the Armenian Church of Mohylów.

Fr. Szymon Krzysztofowicz (1729-1810) came from Łyśc, of the Nedyj family. His father was Krzysztof Nedyj. After graduating from the Armenian College of the Theatine Brothers in Lviv, he was successively parish priest in Złoczów and then (1759) Dean of Kamieniec. Three years later he became parish priest in Mohylów Podolski and held this function until his death. He received the titles of Protonotary Apostolic and Canon Official of the Latin Cathedral Chapter in Kamieniec Podolski. It was he who made the effort to erect, at the expense of the Potocki family, a new brick church for the Armenians of Mohylów, in which the local Catholic believers also found a place. The next parish priest of Mohylów, Józef Krzysztofowicz, who was the nephew of Fr. Szymon, received the bishop’s sacrament as an Ordinary for Armenian Catholics in Russia and then the Church of Mohylów was elevated to the rank of cathedral.