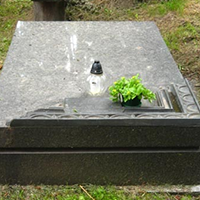 Teodor Axentowicz was born on 13 May 1859 in Brașov in Transylvania, which was then under Hungarian rule (as part of the Habsburg monarchy) and is now in Romania. At that time his father, Deodat, who came from Galicia, was working in the judiciary. In his youth, the artist-to-be travelled extensively – mostly in pursuit of education. He studied in Lwów, Munich (where he graduated from the Academy of Fine Arts), Paris and London. He lived for a few years in both France and England following graduation. In London he married Izabela Gielgud, who came from an old Polish clan of Lithuania. Her forefather, Jan, had become a political exile following the November rising of 1830-1831. This was the same family that produced the eminent British actor Sir John Gielgud. Taking his wife and accumulated artistic experience with him, Teodor Axentowicz travelled to Poland in 1895 and settled permanently in Kraków. He was to work continuously at that city’s Academy of Fine Arts for almost forty years as lecturer and then rector.

It would be impossible to mention all of his works or mention all of the exhibitions that showed them. But it is important to stress that the Armenianness of some of his paintings is quite apparent. His cultural roots inspired paintings such as Baptism of Armenia, portrait of Catholicos Mkrticza I, The arrival of the Armenians in Poland, and a painting that was planned and announced to the Armenian diaspora in London, but not executed, Slaughter of the Armenians of Constantinople. Unfortunately, both for the Armenians of Armenia themselves and for the diaspora, Axentowicz remains undiscovered as an Armenian painter. Yet thanks to the efforts of Gagik Parsamyan, an Armenian painter settled in Gdańsk, much has begun to change in this respect in recent years. Adam Kieniewicz, who died this year and who was nephew of Teodor Axentowicz and president of the Armenian Cultural Association in Krakow, has also striven to promote the painter. In October 2014 he opened an exhibition devoted to the work of his eminent grandfather in Yerevan.

The RCACP will endeavour to continue the mission of preserving the memory of Teodor Axentowicz and promoting his work so that it reaches as wide an audience as possible.