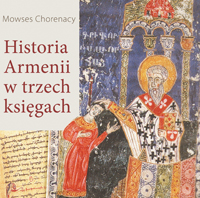 The fourth volume in the Lehahayer Library series, which makes important source material – History of Armenia by Movses Khorenatsi – available to readers, will be on sale soon. It is published by the Research Centre for Armenian Culture in Poland and was translated by Dr Stanisław Ulaszek (University of Gdańsk) from an edition prepared in Russian by Professor Gagik Sargsyan. It was furnished with additional footnotes, commentaries, an introduction and indexes by Professor Andrzej Pisowicz of the Jagiellonian University. A generous donation from Mr Zbigniew Manugiewicz, who is a member of the RCACP Council, greatly assisted publication. Volume four is published by Księgarnia Akademicka in Kraków – as were all of the previous volumes.

Movses Khorenatsi, also known as Moses of Khoren, was an historian of ancient Armenia. His biography is the subject of a number of scholarly disputes. Some believe – arbitrarily – that he lived around the cusp of the eighth century and the ninth century. Yet he claimed himself to have been the pupil of two outstanding members of the Armenian Church who lived on the cusp of the fourth century and the fifth century: Saint Mesrop, known as Mashtots, author of the Armenian alphabet, and Saint Isaac the Great, Catholicos of Armenia, (descendent of Saint Gregory, who converted Armenia to Christianity and is therefore known as the Illuminator). Following the Council of Ephesus (431) they are supposed to have sent Movses Khorenatsi on a journey to the most important centres of Christianity in Jerusalem, Alexandria, Constantinople and Rome. Upon his return he undertook the translation of various works into Armenian and, in old age, he composed a history of Armenia from the most distant, legendary epoch to the first half of the fifth century. He based his account on Armenian sources, on other Christian writings, on the archives at Nineveh and on the works of the writers of antiquity. He wrote in praise of the Bagratuni Dynasty, but primarily in exaltation of his beloved country: Armenia. He linked its history with that of the people of Israel and with the fates of the eastern civilizations of long ago.

Movses Khorenatsi’s History of Armenia is a masterpiece of literature, whose unparalleled richness of content and style confirms the author’s immense narrative craftmanship. To this day it remains a source for, and a foundation of, Armenians’ national identity both in their ancient homeland and in the diaspora. His writings, including On Armenian Kings and Geography, were copied by Polish Armenians in the scriptoria of Lwów and Kamieniec Podolski. Some of them, including a Kamieniec copy of 1640 (National Library of Russia, St Petersburg) and a Lwów copy of 1618 (St James’s Monastery and Cathedral, Jerusalem), are extant. Fr Stefan Roszka, an eighteenth-century scholar, historian and linguist who was the most outstanding Armenian intellectual of Old Poland, was familiar with Khorenatsi’s chronicles and drew upon them in his works.