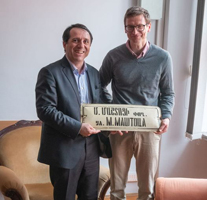 As part of the “My Armenia, My Armenians” series, you are cordially invited from 26 April 2021 to watch an interview with the Turkish historian Candan Badem.

Professor Badem studied Russian at the University of Birmingham in the United Kingdom. He gained his doctorate in history from Sabancı Üniversitesi in Istanbul (estd. 1996) for his research into the Crimean War (1853-1856). In 2009 he became the first Turkish historian to be given access to the collections of the Armenian National Archives in Yerevan. Since that time he has also been conducting research into the history of Armenia in the twentieth century.

In 2016 the Turkish government accused Profesor Badem of treason and of besmirching the good name of Turkey. By government decree, he was excluded from all state universities and state offices. In February 2019 a Turkish court sentenced him to almost two years’ imprisonment. This forced him to leave Turkey. Since then, the international Scholars at Risk programme (SAR) has made it possible for him to work and stay at a variety of European universities. Under the auspices of SAR, he spent November 2020 to April 2021 as a guest of the Villa Decius Institute for Culture and the Jagiellonian University in Kraków.

Professor Badem kindly accepted the invitation of the Research Centre for Armenian Culture, where, with Dr Jakub Osiecki, he discussed his family life and home in Ardahan, his research in Armenia and questions of Turkey’s acknowledgement of the Armenian genocide.

The interview will be available on YouTube from Monday, 26 April at 17.00: