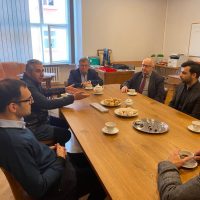 Dr Edward Ghazaryan, the former Armenian ambassador to Poland, was the guest of the Research Centre for Armenian Culture in Poland. The Centre was fortunate enough to be able to work with Dr Ghazaryan on a number of occasions during his diplomatic service in Poland, which was an especially active and fruitful phase in Polish-Armenian relations. The purpose of his first journey to Kraków, which he made at the very beginning of his mission, was to meet our still informal community of researchers and to fulfil official duties by meeting the president of Kraków and the Małopolska voivod. The lecture he gave in the library of Collegium Maius in 2015 began the commemoration in Kraków of the hundredth anniversary of the genocide committed against the Armenians in the Ottoman Empire. In the present conversation, Dr Ghazaryan offered a close and fesh account of current events in Armenia, its international situation, and its social condition. We also discussed plans to work with Armenian communities to organise conferences and publish academic writing.