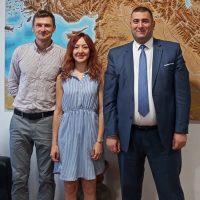 One of the employees of the Research Centre for Armenian Culture in Poland (RCACP), Dr Jakub Osiecki, conducted a series of conversations with representatives of Armenian academic and government institutions from 20–27 September 2021. They were intended to launch or to maintain cooperation with the National Archives of Armenia (Հայաստանի ազգային արխիվ), with the Mesrop Mashtots Institute of Ancient Manuscripts and the ‘Matenadaran’ Research Institute («Մատենադարան» Մեսրոպ Մաշտոցի անվան հին ձեռագրերի գիտահետազոտական Ինստիտուտ), with the Ministry of Education, Science, Culture, and Sport of the Republic of Armenia (Կրթության, գիտության, մշակույթի և սպորտի նախարարություն), with the National Library, and with the museum and library of the catholicate. Our initiatives received what proved to be significant support from the Republic of Poland’s ambassador to Yerevan, who helped organise meetings with these partners.

The discussions with Dr Grigor Arshakyan (Գրիգոր Արշակյան), director of the National Archives of Armenia, continued the consultation begun in 2019, which, due to the war over Artsakh and to epidemiological restrictions associated with the pandemic, did not then conclude, as planned, with the signing of an agreement. During the meeting, we deposited the RCACP’s latest publications with the archive and outlined our requirements in the context of research into Polish-Armenian relations. Dr Arshakyan was happy to agree to the signing of a bilateral agreement regulating and facilitating exchanges of employees, research visits and, primarily, the copying and digitisation of documents kept by the archive. He also accepted an invitation to Kraków and expressed his desire to visit RCACP in the spring of 2022.

Dr Osiecki was received by Arkadi Papoyan (Արկադի Պապոյան), the director of the Department for Foreign Relations and the Diaspora. Marianne Karekayan from the Embassy of the Republic of Poland in Yerevan also took part in this discussion. This was the RCACP’s first meeting with representatives of the ministry. Its current activities were described and English-language versions of publications written by its employees were given to the ministry. Arkadi Papoyan supported a proposal that RCACP should participate in a ministerial programme designed for institutes of Armenian Studies from Europe. We accepted an invitation to attend a conference in November of this year (2021) in Bucharest.

Our partnership with the Matenadaran has lasted for many years. Immediately the conversation began, its director, Professor Vahan Ter-Ghevondyan (Վահան Տեր-Ղևոնդյան), expressed his thanks for this cooperation and for receiving our journal Lehahayer. In return, he presented our representative with the Matenadaran’s latest publications, including recent editions of the journal Herald of the Matenadaran (Banber Matenadarani).

Dr Osiecki was also able to meet Fr Ter Ararat, the director of the Ejmiatsin Catholicate Library, and Professor Harutyun Marutyan, the director of the Armenian Genocide Museum-Institute. Details of the fruits of our work with all of these institutions will be published on our website.

Photograph: Dr Osiecki with Dr Grigor Arshakyan, director of the National Archives of Armenia. Centre: Marianne Karekayan of the Embassy of the Republic of Poland in Yerevan.