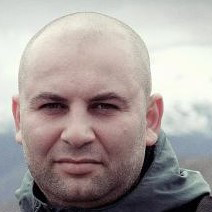 You are cordially invited to listen to an interview with Vahram Mkhitaryan, which Monika Agopsowicz conducted on 16 June 2021 in Gdańsk. Vahram Mkhitaryan is an Armenian film director. He was born in 1977 in Yerevan. He graduated in film direction from the Armenian State Pedagogical University and from the Andrzej Wajda Master School of Film Directing (now the Wajda School). His first visit to Poland in 2005 was as the holder of a Lane-Kirkland scholarship under the auspices of the Polish-American Freedom Foundation.

He has lived for many years in Gdańsk where he works on creative projects and lectures at the Interdepartmental Photography Centre at the Academy of Fine Arts. He also works as a film director, cinematographer, and screenplay writer. On two occasions, in 2009 and 2011, he has been the holder of a Gaude Polonia scholarship awarded by Poland’s Minister of Culture and National Heritage. He completed his first independent short-form documentary Pieśń pasterza [Song of the Shepherd] in 2014. He is also responsible for the short film Mleczny Brat [Milky Brother], which has received several awards and which is the first Polish-Armenian co-production of a fiction film. Based solidly on the everyday life of the Armenian countryside, it is the tale of a young boy named Seto who is awaiting the birth of a new family member he hopes will be a brother. With the beautiful landscape of Armenia as its background, it is an extraordinary and striking creation.

Link to the conversation (active from Monday 28 June)