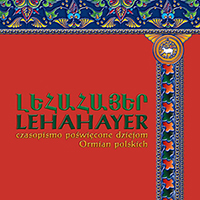 This seminar of the Research Centre for Armenian Culture in Poland was held with the participation of its employees and associates, as well as the president of its Council. It was devoted to discussing editorial plans for the journal “Lehahayer”. The Editorial Committee of the “Lehahayer” Library series was also formed and it was decided that it should be published by Księgarnia Naukowa in Kraków, which has specialised for many years in Armenian history, culture and linguistics.

The editorial committee, which is chaired by Krzysztof Stopka and Andrzej A. Zięba, is made up of Andrzej Pisowicz (Kraków), Judit Pál (Cluj-Napoca), Petr Kaleta (Brno), Tatevik Sargsyan (Simferopol) and vardapet Vahan Ohanian (Venice).