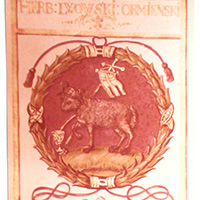 This seminar took the form of a discussion led by Andrzej A. Zięba on the idea of writing an Encyclopaedia of the Polish Armenians.

The encyclopaedia is conceived as a compendium that, from an interdisciplinary perspective, presents a systematized account of a community that has been active within the changing political boundaries of the Polish lands for nearly seven centuries. The Polish Armenian community was an extremely important element of the Armenian diaspora between the fifteenth century and the eighteenth century and also made impressive contributions to the culture of Central and Eastern Europe.

It is a role that has been largely forgotten and that has been overlooked in the international historical literature. Moreover, there has been a tendency in the national historiographies of the new states that emerged in the eastern parts of the Polish-Lithuanian Commonwealth (Ukraine, Belarus) to remove this community from the context of the Polish historical process. In Armenia’s historiography, in turn, the memory of the Armenian diaspora in Poland has been particularly eroded by the spread of the stereotype of its rapid and complete assimilation as a result of the union with the Roman Catholic Church.

We already have a significant number of detailed, monographic, cartographic and synthetic studies on the Polish Armenians. In recent decades the progress of research in this field has been particularly dynamic. Our understanding of the state of the extant sources has deepened, and much work has been done to scan them and collect them in a single database, which is kept at the Foundation for the Culture and Heritage of the Polish Armenians in Warsaw. The productions of critical editions of sources, including Pomniki dziejowe Ormian polskich (Monuments of the history of the Polish Armenians), has also begun. The platform for writing and publishing an encyclopaedia has therefore been thoroughly prepared. It was decided that the Encyclopaedia of the Polish Armenians should be bilingual (Polish and English), as this will allow it to reach a global audience, including those most interested in the Armenian humanities, of whom few know Polish.

The basic aim of the undertaking is to systematize knowledge of the culture of Polish Armenians, to fill its remaining gaps, and to attempt to resolve the research controversies that have arisen around issues such as acculturation, which has been mentioned already. Furthermore, the project will make it possible to consolidate and mobilize the research community at the international, as well as at the Polish, level. It is expected that the most important result will be the dissemination of an account of this culture that is as objective as possible, that is embedded in a broad historical context, and that is reconstructed without political distortions.

The structure of the encyclopaedia will mainly reflect the model of publishing houses like Encyclopaedia Iranica. Hence the plan is to write synthetic entries that are concise and full of information. Yet this will not be encyclopaedia writing as the term is traditionally understood, in which stress is placed on achieving a maximum number of headwords by writing sparsely and reducing information: some questions can be asked from a number of different research perspectives and therefore require multilateral treatment.