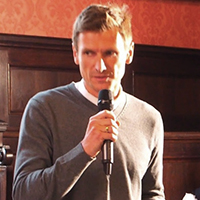 During the seminar, which was something of an occasion because the Centre was able to convene as a guest of the Jagiellonian University’s museum (Collegium Maius) in Sala pod Belkami [the Beamed Room], Dr. Jakub Osiecki presented the results of his archival research on the Armenian Church in the twentieth century. The lecture was followed by a discussion.

Dr. Osiecki made the following points:

The aim of the project carried out within the framework of the “Sonata 11” programme (National Science Centre) was to study the history of the Armenian Apostolic Church in the twentieth century and to answer the question of why it was allowed to function officially for almost the entire time the Soviet Union existed. A second and equally important question is how, or whether, the way the church functioned under the Soviet regime affected its congregations and influenced Armenian religiousness – both in Armenia itself and in the diaspora.

Research work was undertaken within the project’s framework to describe and explain the most important phenomena and events associated with the way the Armenian Church functioned in 1918-1991 – both in the Soviet Union and in the diaspora. The demographic and political situation of this national church changed rapidly in the twentieth century under the following influences: the Armenian genocide in 1915, the Turkish-Armenian war of 1918-1920, Sovietisation, atheisation, Bolshevik persecution of the faithful and the clergy, and the internal division created by the clergy’s (catholicoi of Ejmiatsin) cooperation with the Soviet authorities right up until 1991. Significant political and religious divisions within the Armenian diaspora itself, which is numerous in Russia, the United States and Lebanon, remain and are visible today.

After 1932, the Armenian Church (Ejmiatsin Patriarchate) officially took the side of Soviet ideology, which was probably at the root of the intra-Armenian disputes. It is worth noting that there were also significant transformations within the Armenian intelligentsia and Armenian society in general throughout the twentieth century. Socialism, secularism and a potent anti-clericalism appeared, but this was accompanied by strengthening religiousness and patriotism – especially in the 1980s. The cut-off point for the project’s research is 1991, when the Soviet Union fell and the Armenian-Azerbaijani conflict over Nagorno-Karabakh began.

Archive searches, which were the project’s main methodological tool, were performed in the three most important centres: Moscow, Tbilisi and Yerevan. Materials from the Keston Institute, and recordings of witnesses’ stories (oral history) obtained in Armenia and Lebanon in 2011-2019, were also used. The Columbia Oral History Archive in New York provided a further source. The research methods adopted during the succeeding stages of the project were the analysis and synthesis of information contained in sources and in academic studies. Research tools typically employed in cultural and historical anthropology were also important. Collective memory sources were consulted (recordings) to gain a more complete understanding of the history of the Armenian Church in the twentieth century. The Soviet archives, especially those produced by the Central Committee of the Communist Party of Armenia, or the materials from the Czeka and GPU, required rigorous critical analysis – as did the press material from the entire Soviet period.

The project will be completed in December 2020.