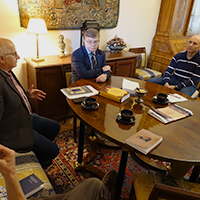 After a long break due to anti-pandemic regulations, we have returned to organising the monthly seminars by the Research Centre for Armenian Culture in Poland. This time, the main topic was the issue of the research potential of an important and recently-published source on the history of the Armenians in Lviv – Jasachy gminy Ormian lwowskich za lata 1598-1638 w języku ormiańsko-kipczackim w opracowaniu Krzysztofa Stopki. [Yasaks of the Lviv Armenian community for the years 1598-1638 in the Armenian-Kipchak language in the study by Krzysztof Stopka]. It was published as volume two of the series Pomniki dziejowe Ormian polskich [Historical Monuments of Polish Armenians]. It is published by Księgarnia Akademicka [the Academic Bookstore] in Kraków and the editor of the series is the Foundation for the Culture and Heritage of Polish Armenians in Warsaw.

Professor Stopka discussed the cognitive value of the source, emphasising its importance for learning about the organisation of the Lviv municipality and the co-dependencies of social structure and property there. Yasaks (tax records) illustrate the internal relations in the Armenian community, family ties and pathways to higher status by acquiring increased wealth and property. They also show the economic links of the Lviv Armenians with other Armenian centres of settlement in the region and their relations with the public life of the Polish state. A picture emerges of financing matters important for the community, both extraordinary (battles over church union) and everyday (education, care of temples, management of community property, duties to the state). Because they contain authentic names, surnames and nicknames used every day in far greater numbers than did the data previously used by linguists analysing the onomastics of Polish Armenians, they are also an invaluable source for learning about Armenian names. The sources also correct conclusions about Armenian names drawn from historiographical accounts, in which the original, Armenian names were replaced by forms specific to the language of the researchers. The yasaks also permit a richer understanding of the genealogies of Armenian families in Lviv at the turn of the seventeenth century, that is, at a time when families were being founded (some exist to this day). The index of people makes using the sources far easier. The characters in it were identified and combined in the yasaks under various terms referring to their position in the family (son-in-law, brother-in-law, wife and widow, for example), in the community (yerespokhan [deputy], mayor) and in the state (excise collector), as well as under nicknames (personal or family), differently written names (many diminutives) and, finally, formal surnames.

Dr. Vahram Mkhitaryan, filmmaker and photographer, lecturer at the Academy of Fine Arts in Gdańsk and director of the short documentary film Pieśń pasterza [The Shepherd’s Song ] and of the short feature film Mleczny brat [Milky Brother ], was our guest during the second part of the seminar. Both films have won many prizes at festivals in Poland and abroad. In Kraków, Dr. Mkhitaryan was filming material for a new project that will deal with the fate of the Skevra Evangeliary.