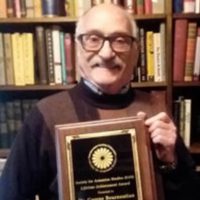 On 14 May 2021 the Society for Armenian Studies (SAS) held a ceremony to honour Professor George Bournoutian’s contributions to the field of Armenian studies, which was conducted by SAS’s president, Professor Bedross Der Matossian. Professor George Bournoutian was born and raised in Isfahan and is the son of a Polish mother and an Armenian father. His mother reached Iran with the army of General Władysław Anders. As a child he spent eighteen months in Poland with his parents following WWII. During this time his father worked on the rebuilding of Warsaw, which the Nazis had destroyed. Upon their return to Iran the family maintained their contacts with Polish culture. The young George attended evenings for children from mixed families organised by the Polish embassy, while his publisher father supported the Armenians in Poland, which was then under communist rule, by providing them with Armenian language texts. His plan to study in Warsaw could not be put into effect owing to the Cold War. Having completed his higher education there, George Bournoutian settled permanently in the United States. He lectured on the history of Iran at the University of California, Los Angeles, on the history of Armenia at Columbia University, Tufts University, New York University, Rutgers University, the University of Connecticut, Ramapo College, and Glendale Community College, and on the history of Russia and the Soviet Union at Iona College. He wrote more than thirty scholarly books on the history of Armenia, Iran, and the Caucasus. His work has been translated into several languages, including Armenian, Persian, Turkish, Polish, Japanese, Spanish, and Arabic. He is furthermore one of the forty editors of Encyclopaedia Iranica. In recent years – the latter ones of his life – Professor Bournoutian lent his support to the idea of establishing the Research Centre for Armenian Culture in Poland (RCACP). Moreover he was happy to accept when the president of the Polish Academy of Arts and Sciences, Professor Jan Ostrowski, invited him to sit on its council.

Those taking part in the online ceremony organised by SAS included Professor Sebouh Aslanian (UCLA), Dr Asya Darbinyan (Clark University), and Professor Stephen Badalyan Riegg (Texas A&M University), who spoke of Professor Bournoutian’s contribution to Armenian studies, Iranian studies, and Russian studies. In discussing Professor Bournoutian’s accomplishments in the field of the early-modern history of Armenia, Professor Aslanian emphasised the importance of the English translations (with commentaries) of sources important to Armenian history, such as the work of Simeon of Poland (Symeon Lehacy), Arakel of Tabriz, and Catholicos Simeon of Yerevan (Simeon Yerevantsi), as well as a selection of documents concerning Russian policy towards Armenia. For her part, Dr Darbinyan stressed Professor Bournoutian’s contribution to knowledge of political and socio-economic processes in Transcaucasia – especially in eastern Armenia in the final decades of Persian rule and in the Erivan Khanate in the late eighteenth century and early nineteenth century. Drawing particular attention to Professor Bournoutian’s most recent work – From the Kur to Aras: A Military History of Russia’s Move to the South Caucasus and the First Russo-Iranian War (2020) – Professor Badalyan Riegg spoke in turn of the significance of Professor Bournoutian’s research into the history of Russian imperialism in the opening decades of the nineteenth century. The presentation of George Bournoutian’s attainments was completed by Professor Bedross Der Matossian, the president of SAS, who reminded his audience of Bournoutian’s polemical efficacy in combatting revisionist Azerbaijani pseudo-historiography, which presented a false account of the history of Artsakh to western scholarly audiences.

Responding to these encomiums, Professor Bournoutian declared that he was not only deeply honoured to receive the SAS award – because ‘to be appreciated by one’s peers is the best satisfaction one can hope for’ – but also heartened to witness the flourishing of a new generation of specialists in Armenian Studies who, with the accomplishments of their predecessors at their disposal, were now improving upon them significantly. ‘I can sleep easy knowing that the torch has been passed into good hands’ he added.