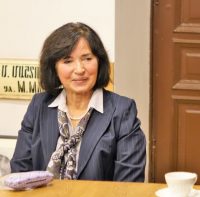 In the latest instalment of our seminar series, which was held on 19 November 2021, Professor Ewa Siemieniec-Gołaś of the Institute of Oriental Studies at the Jagiellonian University, who is a member of the Council of the Research Centre for Armenian Culture in Poland, gave a lecture there on the Kipchak language of the Polish Armenians and on Professor Edward Tryjarski’s achievements in this field of research. In addition to the Centre’s employees, Andrzej Pisowicz, Professor Krzysztof Stopka, Fr Marek Miławicki, Dr Andrzej Gliński, Mieczysław Prószyński, Monika Agopsowicz, Agnieszka Karbowska, and Jakub Łukasik also attended the seminar, which was held as a combined in-person and online session.

Professor Siemieniec-Gołas also reminded her audience that much remains to be done in the way of investigating the ample scriptural legacy of this now extinct ethnolect, which apart from vital records, includes material on the sacred, literary, and economic domains of culture. This written inheritance stands as a monument both to a language and to a unique ethnic culture.

The themes the professor raised in her lecture were taken up in the lively discussion that followed. The participants shared their reflections on Professor Tryjarski’s research theses and considered Gerard Clauson’s ideas on the ethnogenesis of Kipchak-speaking Armenians. Further, they raised the question of cultural heritage, which is acknowledged today by many countries, including Poland. It was there that writing in Armeno-Kipchak arose and it was there that the descendants of the community that spoke this ethnolect every day used it to communicate when trading with the east and in diplomacy. Most importantly, though, it was there that – from at least the fifteenth century until the beginning of the eighteenth century – these descendants used Armeno-Kipchak as a means of written expression. The cultural inheritance of the Polish Armenians is of interest to people in a good proportion of the area in which Turkic languages are spoken, such as Kazakhstan, Kyrgyzstan, and Turkey itself.