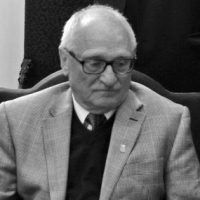 It is with great sadness that we announce the death of Professor George A. Bournoutian, who was a member of the Council of the Research Centre for Armenian Culture in Poland (RCACP). Along with his wife, the professor was a guest at the inauguration ceremony for RCACP in 2019. He also advised us on our research projects. That was his second visit to Kraków, where he had already been in 2018 to attend a conference organised by Biblioteka Kraków (Kraków City Libraries) entitled Polish Armenians and the Path to Polish Independence. The conference produced a book of the same name, which included a paper by Professor Bournoutian entitled The Establishment of the Contemporary Armenian State. We had been planning to do further work together. His passing is a profound loss to us and to the entire world of Armenian studies.

His superb command of multi-lingual historical sources allowed him to acquire a consummate understanding of a number of issues – especially the history of the Armenians in Persia, Russia, the Ottoman Empire, and Poland, as well as Russian-Persian relations, and conflicts in the Caucasus. From 1964 he lived and worked in the United States. He lectured on the history of Iran at the University of California, Los Angeles, on the history of Armenia at Columbia University, Tufts University, New York University, Rutgers University, the University of Connecticut, Ramapo College, and Glendale Community College, and on the history of Russia and the Soviet Union at Iona College. He was furthermore co-editor of Encylopaedia Iranica. He was indefatigable in his pursuit and defence of historical truth. Of his numerous publications, the following are particularly worthy of mention: From the Kur to the Aras. A military History of Russia’s Move into the South Caucasus and the First Russo-Iranian War, 1801-1813 (2021); The 1823 Russian Survey of the Karabagh Province. A Primary Source on the Demography and Economy of Karabagh in the First Half of the 19th Century (2011); Armenians and Russia: A Documentary Record, 1626-1796 (2001); Russia and the Armenians of Transcaucasia: A Documentary Record, 1797-1889 (1998); A Brief History of the Aghuank Region (1998); The Khanate of Erevan under Qajar Rule, 1795-1828 (1992). He translated into English and published – with a critical commentary – The Chronicle of Abraham of Crete, The Chronicle of Arakel of Tabriz, and The Travel Accounts of Simeon of Poland (Symeon Lehacy).

The professor had family ties with Poland. His Polish mother reached Iran, where he was born, along with General Anders’ Army during WWII. He spent the immediate post-war years in Poland, where his Armenian grandfather worked rebuilding Warsaw, which the Nazis had destroyed. He became familiar with Polish culture in his early years thanks to the cultural initiatives of the Polish embassy in Teheran. It was on these experiences that his identification with contemporary Poland rested. He very much wanted to acquire Polish citizenship. Unfortunately, despite the strenuous representations made by the RCACP to The Chancellery of the President of the Republic of Poland, the matter could not be resolved in time. An episode of the My Armenia, My Armenians series will be dedicated to Professor Bournoutian and a biographical article will be published in the next and ninth edition of the Lehahayer journal. We would like to introduce Polish readers to his account of Armenian history by translating his work A Concise History of the Armenian People, which by 2018 had become an academic textbook in the United States, had already been published in seven editions there, and had been translated into Armenian, Spanish, and Russian.

We extend our condolences to Professor Bournoutian’s family.