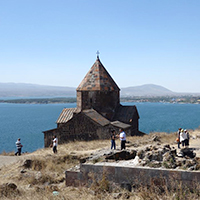 Our guest at the first meeting will be Professor ANDRZEJ PISOWICZ, an outstanding Armenist from Kraków and a member of the Council of the RCACP. A note on his academic achievements is available on the RCACP website (armenopolonia.pl) at  About us/Structure/Council.

The meeting will begin next Monday, 29 June, at 14.00. You are invited to watch and participate. A report of the meeting with Professor Pisowicz will be available to watch later at
FB – https://www.facebook.com/armenopolonia