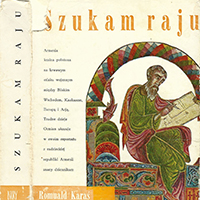 We invite you to the next meeting in the “My Armenia, My Armenians” series. On the last Monday of the month, which is 28 September 2020, at 17.00, Romuald Karaś, the author of a book of reportage on Soviet Armenia entitled Szukam raju (Looking for Paradise, 1975; second, revised edition 1979), will be the guest of the Research Centre for Armenian Culture in Poland. The event will take place in the Karolina Lanckorońska Room of the Polish Academy of Arts and Sciences, ul. Sławkowska 17 (ground floor).

Due to the restrictions imposed by the pandemic, we would ask those who wish to attend in person to kindly notify their intention at the following address  obkop@armenopolonia.pl

Romuald Karaś (b. 1935) is a reporter and columnist who was first associated with Puławy and Lublin. He made his debut over seventy years ago in the pages of local newspapers, such as “Sztandar Ludu” [People’s Tribune] and “Życie Lubelskie” [Lublin Life]. His pieces also featured in “Życie Literackie” [Literary Life], “Tygodnik Kulturalny” [Social and Cultural Weekly] and the youth paper “Walka Młodych” [Struggle of the Young]. With time, he began writing radio plays, radio and television programmes, and books.

His Armenian adventure began when he was comparatively young, for as he himself recalls, he had been fascinated since his youth by the Armenian tenement houses in Zamość, which he saw when visiting with his father on trips from nearby Szczebrzeszyn. He made his first Armenian contacts in Kraków. So fascinated was he by the columns written by the Polish Armenian Janusz Roszko, that he made his way to Kraków to learn the reporter’s art. Though in the end he did not settle there permanently, it was thanks precisely to Roszko that he was despatched by the “Iskry” publishing house to Armenia to write a book about that ancient nation. This was the journey that in 1975 produced the mysteriously titled book of reportage Szukam raju (Looking for Paradise), which was issued as part of the “Naokoło świata” (Around the world) series.

It is one of the few detailed book-length presentations in Polish of Armenia, of its history and culture and, above all, of its people. Romuald Karaś even signed up for private Armenian lessons when he was preparing the book, which remains the most authoritative account for anyone thirsting for knowledge of this Transcaucasian country. Karaś held hundreds of conversations, which enabled him to capture and reflect the spirit of this country and nation very well. His interlocutors included Catholicos Vazgen I, the writer Gevorg Emin and the painter Martiros Sarian, as well as a host of ordinary, kindly Armenians.

The meeting with Romuald Karaś will be transmitted online via Facebook at  https://www.facebook.com/armenopolonia