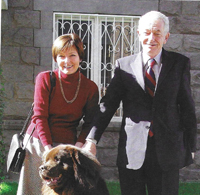 As part of our series of meetings devoted to personal experiences and knowledge of Armenia, “My Armenia, My Armenians”, you are cordially invited to a discussion with Dr Tomasz Knothe (former Polish ambassador in Yerevan) and his wife, Maria Anna.

Dr Knothe is a graduate of the Moscow State Institute of International Relations. He was awarded his doctorate in public international law by the Institute of Law within the Polish Academy of Sciences in 1971. In 1972-1977 he worked at the Polish Institute for International Relations and in 1977-1990 at the Institute of History within the Polish Academy of Sciences, where he studied the histories of Latin America and Russia. In 1990 he was appointed vice director of the Office for Interparliamentary Relations in the Chancellery of the Polish Parliament before becoming head of that parliament’s Commission for Foreign Affairs. In 1994-1995 he was a lawyer at the Office of the United Nations’ High Commissioner in Warsaw.

He took up diplomacy in 1995. In the following year he became vice director of the Eastern European Department at the Ministry for Foreign Affairs and, in 1998, deputy permanent representative at the Republic of Poland’s Permanent Mission to the United Nations’ office in Geneva. In 2002 he accepted the post of deputy director at the Department of the United Nations System and Global Issues within the Ministry of Foreign Affairs. He assumed control of the Polish diplomatic mission in Yerevan in 2004 and remained in that post until 2009.

Maria Anna Knothe was a researcher and lecturer at the Institute for Polish Diaspora Studies in the Jagiellonian University, where, as part of Professor Marcin Kula’s team, she investigated issues of migration on the American continent. She was also a radio broadcaster for many years. She drew on this experience during her time in Yerevan, where she worked as head of a department teaching Polish as a foreign language at the Brusov University of Languages. Her account of this period is available in a paper entitled: Wzajemność jako niezbędny element nauczania w kontekście wielokulturowym [Reciprocity as an essential element of learning in a multicultural context] in: Polacy i świat, kultura i zmiana. Studia historyczne i antropologiczne ofiarowane profesor Halinie Florkowskiej-Frančić, Kraków 2016, s. 647-654 [Poland and the world: culture and change – historical and cultural studies in honour of Professor Halina Florkowska-Frančić].