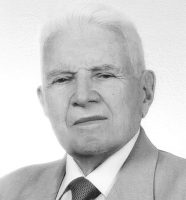 Edward Tryjarski was a graduate of law and of Turkology. He studied the latter at the Institute of Oriental Studies in the University of Warsaw. He earned his doctorate in 1961 with a thesis on the Kipchak ethnolect of the Polish Armenians. He pursued his research within the institutional structure of the Polish Academy of Science: first in the Department of Oriental Studies (1953-1969) and, from 1970, in the Institute of Material Culture (later the Institute of Archaeology and Ethnology), where he was a professor from 1974 until his retirement. He served as secretary to the editorial board at Rocznik Orientalistyczny (Yearbook of Oriental Studies) in 1957-1976 before becoming that journal’s editor in chief – a post he filled for very nearly three decades until 2004. He was a member of numerous academic societies, including Société Asiatique, The Finnish Oriental Society, The Polish Oriental Society, The Permanent International Altaistic Conference (PIAC), and the Oriental Studies Committee at the Polish Academy of Science (honorary member).

He devoted numerous publications, including articles, reviews, editions of sources, bibliographical notes, and reports in English, German, French, Russian, Polish, and Turkish, to the theme of the Armeno-Kipchak ethnolect. Other than works already mentioned, it is also worth noting his monumental Dictionnaire arméno-kiptchak d’après trois manuscrits des collections viennoises (1-4, 1969-1972) (Armeno-Kipchak Vocabulary on the Basis of Three Manuscripts Held at Collections in Vienna) and Armeno-Kipchak Texts in the Alchemical Treatise by Andrzej Torosowicz (XVII century) (2005). His shorter work has been collected in a volume entitled Armeno-Kipchak Studies (2017). He received the Order of St. Mesrop Mashtots, which is conferred by the Matenadaran Institute of Ancient Manuscripts in Yerevan, for his services to the study of Armenian culture.