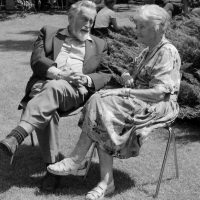 Dr Janusz Kamocki, who had died in Kraków on 22 October 2021, was laid to rest in Sandomierz six days later. A descendant of a landed family from the Podgaje estate near Sandomierz, he was a distinguished Polish patriot who resisted the Germans as an underground soldier during World War II (National Military Organization, Home Army, National Military Union) and was later imprisoned by the communist regime (1962-63). He graduated in ethnography at the Jagiellonian University under the tutelage of Professor Kazimierz Moszyński and served for many years as curator of the Kraków Ethnographic Museum. He taught at universities in Lublin, Wilno, and Katowice. The ethnographic fieldwork he carried out in Armenia in 1975 left him with a profound attachment to the Armenian nation and its culture, customs, traditions, and history. In 1980 he became involved in creating the structures of the Solidarity movement and in the social renewal it engendered. In October of that year, he took part in Kraków in the first convention since World War II of Polish Armenians expelled from the eastern borderlands, established the Circle of Interest in Armenian Culture at the Polish Ethnological Society in Kraków (1980), and supported the creation of the Armenian Cultural Association (1990) and its subsequent activities. When Krzysztof Stefanowicz was its president, the latter institution made him an honorary member on the twenty-fifth anniversary of its foundation (5 December 2015). The Witness of History (Świadek historii) award was conferred upon Dr Kamocki by The Institute of National Remembrance. He remained active in education and held regular meetings with young people very nearly to the end of his life. He played a leading role too in plans to raise a Monument to the Home Army in Kraków. He was posthumously awarded the Grand Cross of The Order of Polonia Restituta (Krzyż Wielki Orderu Odrodzenia Polski) by the President of the Republic of Poland, Andrzej Duda. Dr Kamocki deposited the papers connected with his activities promoting the cause of the Polish Armenians with the Research Centre for Armenian Culture in Poland.