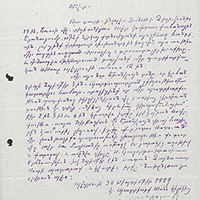 Andrzej A. Zięba, director of the Research Centre for Armenian Culture in Poland (RCACP), and Maria Ohanowicz-Tarasiuk, president of the Foundation for the Culture and Heritage of Polish Armenians, have signed a letter of intent concerning long-term cooperation in work on documents and archives. In 2020-2021 this will involve the papers of the last Armenian-Catholic archbishop of Lwów, Rev. Józef Teodorowicz (1864-1938).

For fourteen years, that is to say throughout its existence, the Foundation for the Culture and Heritage of Polish Armenians has been working to restore the memory of Archbishop Teodorowicz. Its achievements in this respect include helping to secure a resolution of the Senate of the Republic of Poland on the seventieth anniversary of the archbishop’s death, distributing three editions of a CD containing his sermons (accompanied by a booklet entitled Armenian Archbishop Józef Teodorowicz: Eminent Polish Priest, Preacher and Statesman), organising a large number of commemorative events, publishing three thousand of his documents at archiwum.ormianie.pl, curating, along with the Senate of the Republic of Poland, an exhibition entitled Forgotten Great: Armenian Archbishop, and Eminent Polish Priest and Statesman, Józef Teodorowicz (1864-1938), which was displayed in ten towns and cities, erecting a plaque in the Roman-Catholic cathedral of St. John in Warsaw, producing a special subpage devoted to the archbishop (http://www.skarbnica.ormianie.pl/?id=9), and compiling a genealogical tree of the Teodorowicz family. As a part of these initiatives, the Foundation has often made archival material available for publications and academic articles.

To serve the latter purpose, the Foundation conducts archival and conservation work on the extensive collection of archive materials in its care, which is supplemented by new additions, gifts and the pool of legacy material. Some of the historical resources in the archive still need to be arranged or sequenced. This is especially true of the archive of Archbishop Józef Teofil Teodorowicz. A large proportion of the work involved in putting the clergyman’s papers in order has, nevertheless, been completed – all that remains is to produce the final catalogue. It will then be ready for publishing via ZoSia (Zintegrowany System Informacji Archiwalnej; Intregrated Archival Information System). This is being done at the Foundation by Hanna Kopczyńska-Kłos M.A., who is a professional archivist. The funds to perform this task, which will have taken many years once finished, have been allocated by the Ministry of Administration and Internal Affairs.

As the completion of one of the research strands it is pursuing depends on it, the RCACP is interested in participating in this work. The strand in question is the history of the Armenian Catholic Church in Poland. A biographical dictionary of the Armenian clergy from the Middle Ages to the present day and monographic treatments of Archbishop Teodorowicz are being written as one component of this strand of research. As a part of the duties of his post, RCACP has nominated Dr Tomasz Krzyżowski to cooperate on the substantive issues to be resolved in finalising the work on Archbishop Teodorowicz’s papers, which are made up of 1,800 archival items (this is an approximate number: it may be that some items will be combined or divided in the final stages of the work – but this occurs only sporadically).

Progress report on work on the archbishop’s papers:

It is now necessary to: